Up until I read the last thirty pages of Assumption, my plan for this response was to talk about how Ogden Walker and his approach to detection subvert or reaffirm Raymond Chandler’s conception of detective fiction as laid out in “The Simple Art of Murder.” I suppose I still could. Ogden is simultaneously a man who, as Chandler says, “talks as the man of his age talks” and certainly appears to not be the kind of person who would despoil a virgin; nonetheless, he is not impressively heroic, nor does a figure like him present a model for the creation of a better world—quite the opposite, actually. Perhaps that’s as far as that discussion can go although one might consider what Everett is saying about the type of the detective when it turns out that our intrepid hero takes the line between criminal and detective that most gumshoes straddle and obliterates it.

So much for that. Now, back to the ending.

It obliquely reminds me of Herbert Quain’s The God of the Labyrinth, especially the phrase about chess players that signals to the reader that the crime’s solution is wrong, and thus an “unquiet reader rereads the pertinent chapters and discovers another solution, the true one” (Borges 74). Almost immediately after finishing the novel and taking a few seconds to mouth the words “What the hell?” once or twice, I flipped through the earlier sections of the novel to try and discover if something else was amiss, now fully aware that neither Ogden nor the narrator can be trusted. I congratulated myself on figuring out that Wally Yates was a figment of Ogden’s imagination, but like Ogden upset about missing out on earlier clues, I let my skepticism run wild. “Interesting that there was only one set of footprints in the snow leading up to Mrs. Bickers’s house,” I murmured with an air of erudition, “and wasn’t there supposed to be much more money stolen from One Hand than twelve-thousand dollars? Where did the rest go?” I started to wonder if my own search was, as Ogden so flatly puts it, “some ego thing, or, worse, some macho thing” (150).

Like Quain’s novel, Assumption thrusts the burden of detection onto the reader. However, a true resolution in Assumption is doubtful. It is very difficult to pin down when or exactly why Ogden might have lost his grip on reality; perhaps it did not occur until the third section of the novel, and the inconsistencies early on are just that. It likely occured somewhere in the gaps between cases in the novel. Perhaps his racial background or attitude about authority or persistent loneliness all contribute to his break with reality. One wonders if, as a detective, the reader reaches the same conclusion Ogden does: “Nothing makes sense and that’s the only wat that any of it can make sense” (225).

I wonder if Assumption—which is not exactly metaphysical, so please bear with me here—might be doing some of what Michael Holquist claims postmodern detective fiction does, which is “dramatiz[ing] the void” and revealing that it is not death that requires a solution but that “in the new metaphysical detective story it is life which must be solved” (155). If so, then what is the solution to life that Assumption proposes? Distrust the mind? Distrust everything and everyone, including those you think you can trust the most, whether they are your good friend or an authoritative narrator? Distrust all your assumptions? That last one was groanworthy. I apologize.

Speaking of groans and crimes: 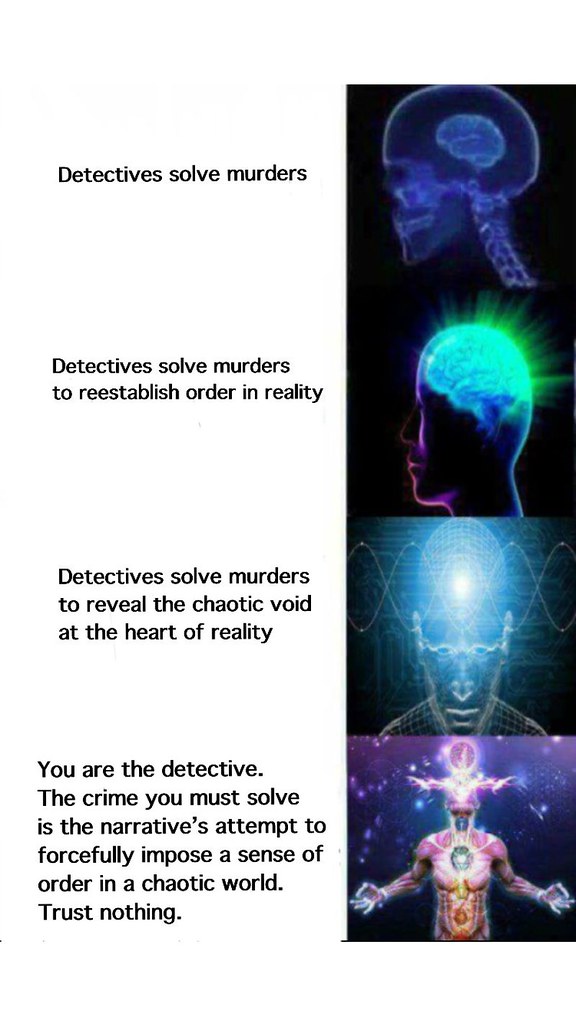